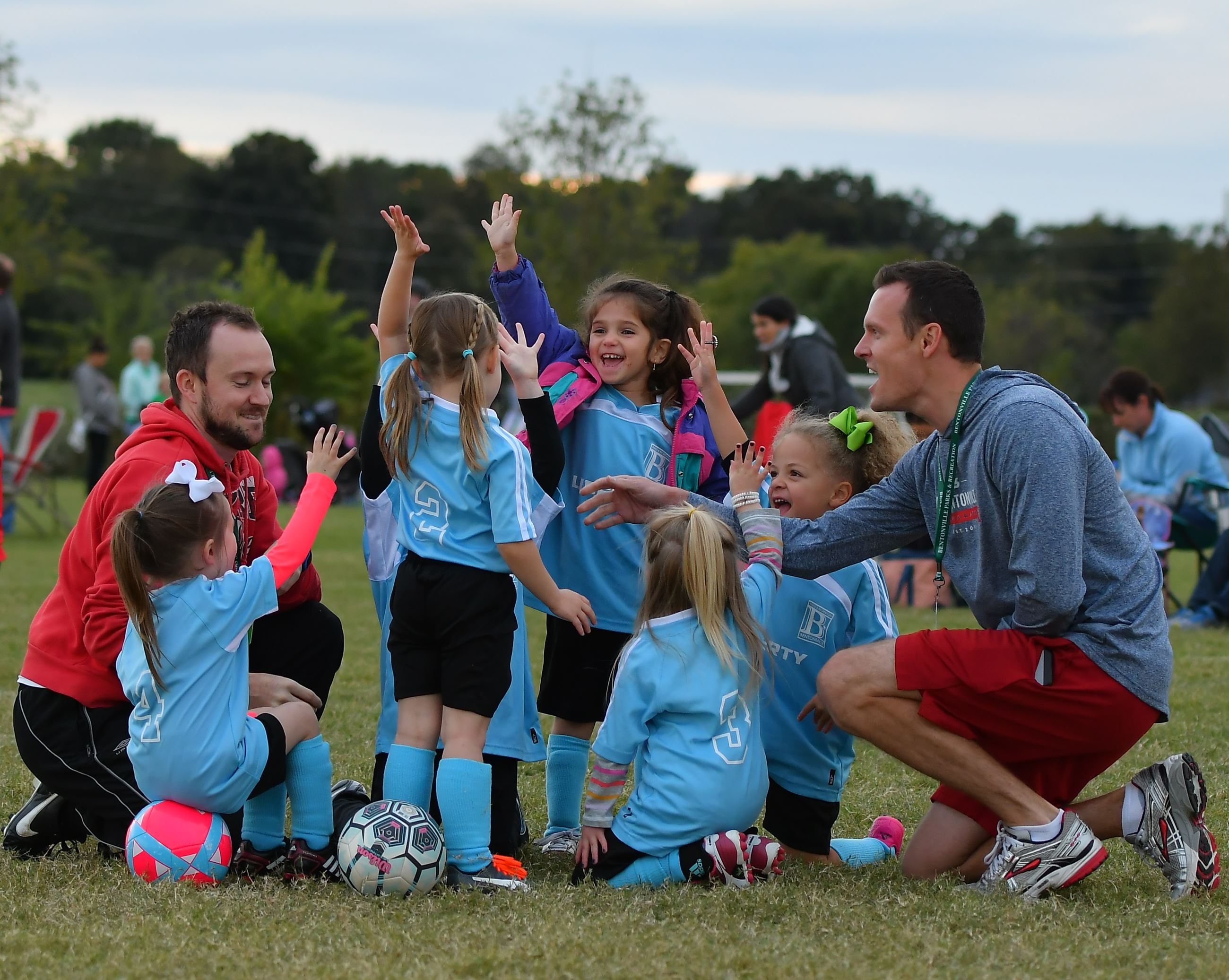 Bentonville Parks and Recreation will offer a recreation youth soccer program for girls and boys ages four to Jr. High. As a part of a comprehensive approach to community recreation, our program focuses on participation, sportsmanship, skill development and having fun! Participants are will be assigned to teams based on school attendance as much as possible.

For further information please review the below changes we've made in order to play ball this fall.

Below are changes we've made to the fall soccer program to limit exposure, maintain safety, and allow for proper social distancing.

ADJUSTED GAME-TIMES: We will be staggering our game and practice times to allow for a reduced amount of people entering and exiting the ballpark at a given time. This will limit congestion at entry and exit points at the soccer fields.

FIELD LAYOUT ADJUSTMENTS: We have changed where we are positioning our fields inside our complex to allow for all fields to be further spread out. This allows spectators to be view games while not sitting within 6' of another household.

HOME AND AWAY SIDELINES: New to Fall of 2020, there will be Home and Away sidelines. Parents, Players, and Coaches will all sit on one sideline with the opposing players, coaches, and spectators all being on the opposite side of the field. This allows for spectators of the "home" team to all remain separated from the opposing team's spectators.

PHYSICAL DISTANCING MARKERS: We will be lining the sidelines of our soccer fields with seating circles to help spectators know where to sit and how to properly social distance from others while watching a game.

SCHOOL-BASED COHORTS: Typically our league is formed through a random player assignment. As players are already exposed to other children within their school, we are forming teams based on where players attend school. This will reduce additional exposure to other children through our league. Teams will be formed by school enrollment, provided registration allows complete teams from a given school. If registration doesn't allow, the league will combine "school-based teams" to allow for least possible exposure.

SCREENING LOCATIONS: We will have multiple screening locations throughout the park to allow for less gathering in a given location where players, coaches, and staff must be screened prior to participating in activity each day. This improves proper social distancing and reduces exposure.

SCRIMMAGES: Teams will not be permitted to host scrimmages between opposing teams during their practice times. This will reduce the amount of exposure that occurs outside of gameplay.

Below are the safety regulations in place for the fall season. Regulations and guidelines are set by state officials and the Arkansas State Department of Health.

TEMPERATURE CHECKS: All coaches and Staff will have their temperature checks prior to participating in activity. This will be done while being screened each day. If a coach exceeds a 100.4 temperature that day, they will not be permitted to participate.

MASKS: Face coverings that completely cover the nose and mouth are required for everyone 10 years of age and older within the park when within 6 ft. of another non-household member.

PHYSICAL CONTACT: To minimize physical contact, high fives, hugs, and handshakes will not be permitted during this time. "air fives", foot bumps, or verbal congratulations will be used instead. Post-game "good game lines" will not take place this season. Instead opposing teams will congratulate the other teams from across the field via verbal congratulations or by clapping.

PHYSICAL DISTANCING: Coaches will be asked to limit practice activities and attempt to keep player distanced as much as possible. During games, players will sit in a player box with 6 feet of spacing between each other.

SANITATION: We will be cleaning our facilities including restrooms, gate entrances, and high traffic touch points multiple times per day. Our team uses a Fresh-15 cleaning solution that kills the COVID-19 virus on contact, but is safe to the touch. We will be providing teams with sanitary wipes, hand sanitizer, and proper equipment to clean team issued equipment each practice and game.

We are looking for enthusiastic volunteer soccer coaches for every age group in our league. Please consider coaching your child’s team. Coaching is an incredible opportunity to make a positive impact in the lives of young athletes! Please indicate on the registration form your interest. If you do not have a child in the program, please contact us to volunteer. Contact information can be found on this page for the soccer program.